Well done to Monkey Business, Cam Rae's green flying machine, winning in style at Geelong Raceweek 2013 (festival of sails) against a gun fleet of Australia's sportsboats including some lightweight arms racers like Vivace (the Leigh-Smith's other ride alongside their shaw 650 Moneyshot), a fleet of Thompsons and a few other 6.5m boats including another 2 Shaw 650s and a Viper 640.

This story ruthlessly lifted from SBA by the new owner of the SHaw 650 Audi Penfold Burwood Racing.....after his recent win in his A31....

With temperatures hitting record highs in Australia, our thoughts are with all the Antipodeans as they deal with some truly awfully hot weather on the mainland and in Tasmania. Stay safe guys.

Closer to sea, temperatures are also rising as David Ellis' new Shaw 650 Audi Penfold Burwood leaves the graphics shed and hits the high seas of Melbourne. Having just won Launceston - Hobart in his A31 (http://www.sail-world.com/Australia/Launceston-Hobart-2012---Penfold-Audi-Sport-named-provisional-winner/105105 ), David will be seriously campaigning the little sister to his winning A31 in Victoria.

As a 'turbo good' crew (according to the guys they race against), we wish David, Deb, Scarlett and the team all the best...if nothing else they have a VERY SWEET looking Shaw 650. 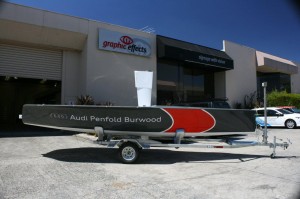