Nice little result by the Octopussy in the last weekend gone by; sailing with the big kite and in some big breeze, perhaps 1/2 owner Rees wished he'd already built his reaching kite! Despite a bit of a navigation confusion (the problem of being a lead boat sometimes), Octopussy has taken a nice podium spot early on in the Fremantle winter series, and I am sure hopes to take a few wins away from the top Viper in Perth, which is very well sailed, and did well to come so close to the 650. Nice pics to follow....http://www.fsc.com.au/cproot/1317/3/sports%20boats.pdf

Shaw 650 Octopussy on the burst 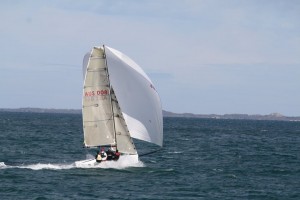 When passing, please use the right lane

Over the last month, the Australian Shaw 650 contingent have been putting up some solid performances.